www.medfoodcultures.org
20/01/2019 - THE 2° WORLD CONFERENCE OF THE REVITALIZATION OF THE MEDITERRANEAN DIET: STRATEGIES TOWARDS MORE SUSTAINABLE FOOD SYSTEMS IN THE MEDITERRANEAN REGION. PALERMO, 15-17 MAY 2019

From 2003 to 2019: The Historical Contextualization of the Second World Conference 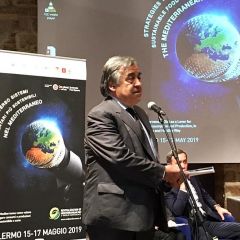 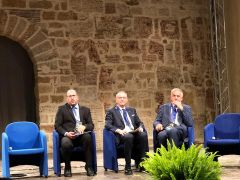 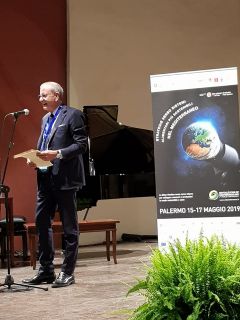 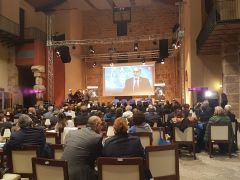 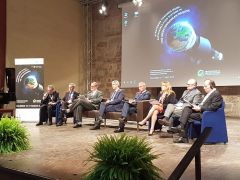 Session 1:A Mediterranean Contribution on Environment and Sustainable Co-Development to the “Summit of the Two Shores” 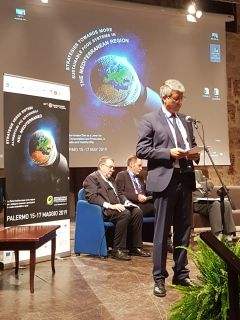 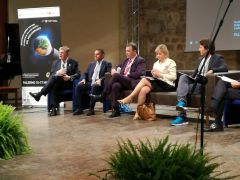 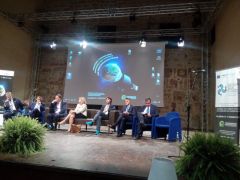 Towards the Sustainability of Small Scale Fisheries and Aquaculture in the Mediterranean: Status, Activities and Prospects 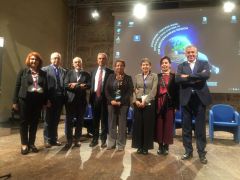 Solutions for Coping with Malnutrition, Primary Prevention and Public Health Nutrition in the Mediterranean Region 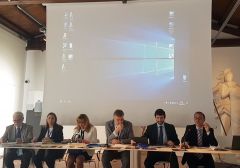 Developing skills for addressing the deep roots of migration in the Mediterranean: training youth, developing agriculture and creating opportunities for rural sustainable development 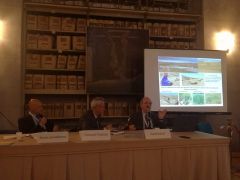 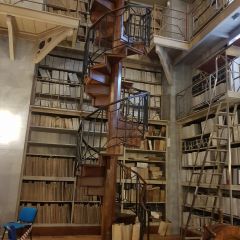 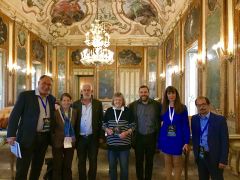 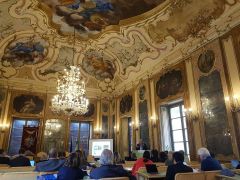 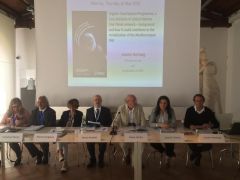 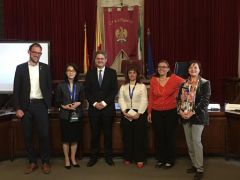 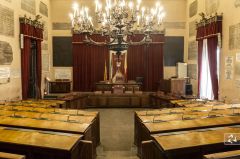 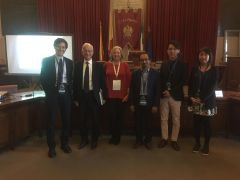 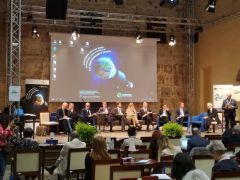 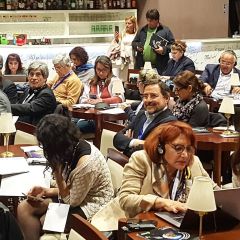 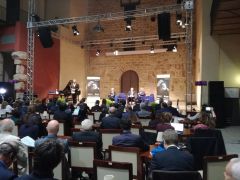 From 2003 to 2019: The Historical Contextualization

of the Second World Conference 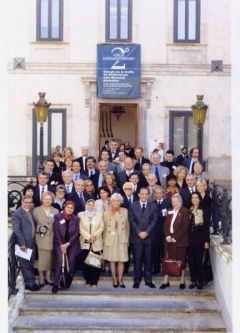 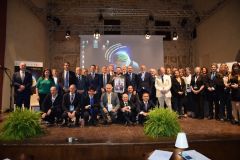 who were present in 2019 Palermo

Second World Conference on the Revitalization of the Mediterranean Diet 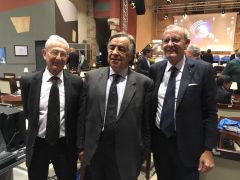 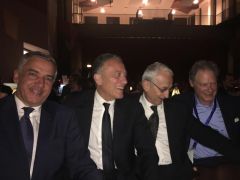 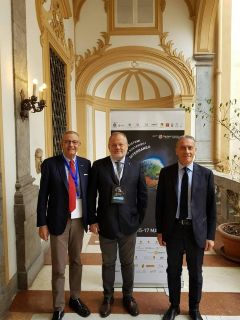 The Mediterranean is currently seen mostly as a dividing sea, but culturally diverse countries are still found united within the Mediterranean diet heritage, without this distorting the identity of each of them.

The Mediterranean diet, acknowledged by UNESCO as an intangible cultural heritage of humanity, is testimony to the strong connections between peoples, who live around the same sea, their territories and their ways of life. Today, these ties need to be strongly safeguarded from increasing erosion and revitalized as a contemporary sustainable and healthy life style. The Mediterranean is today a region in which growing ecological, economic, social and cultural challenges coexist with unresolved international tensions. Significant discrepancies in development levels between countries, together with regional conflicts, raise more challenges for the sustainable future of the Mediterranean areas.

Across the Mediterranean region, there is an “inequalitarian drift” in the current relations between Northern Mediterranean countries and Southern-Eastern ones, where many difficulties are encountered due to the existing economic, social and cultural disparities.

In fact, the macroeconomic indicators of the Mediterranean region emphasize the marked heterogeneity among the countries and a growing gap between the advanced economies in the northern shores and the less developed ones in the southern/eastern ones. Indeed, the region is facing unprecedented global challenges that affect the sustainability of food systems, from agriculture to fisheries, and thus the livelihoods of millions of farmers, fishers, herders, and forest-dependent communities and their families.

The Mediterranean coasts account for 30 per cent of global tourist arrivals in the region. Global shipping routes through the Mediterranean Sea make the density of maritime traffic exceptional for this semi-closed sea. Approximately one-third of the Mediterranean population is concentrated along its coastal hydrological basins, where environmental stresses have increased significantly. Urban agglomerations on the Mediterranean coasts, along with tourist infrastructure, have resulted in the development of large and mega-cities, with consequent pollution pressures from the growing population and the increase in economic activities in a particularly fragile environment along the coastal zones.

The marine resources and ecosystems of this region have come under increasing pressure in recent decades, driven by demographic and economic growth as well as by diversification and intensification of marine and maritime activities, as well as the expansion of the Suez Canal. Pollution, alien species, illegal, unreported and unregulated fishing, as well as overfishing - all have adverse impacts, not only on the marine ecosystems, but also on the well-being of Mediterranean coastal communities and riparian countries. The recent surge in the exploitation of hydrocarbons and minerals under the Mediterranean seabed also poses increased threats to the environment.

In particular, the NENA (Near East and North Africa) countries are facing pressing challenges that are greatly affecting their capacity to increase sustainably food supplies for a growing population (e.g. booming young populations) and consequent increased food demand and market prices, increasing poverty, food insecurity and malnutrition as well as transboundary plant, animal and fish pests and diseases and man-made conflicts. The NENA is a region intensively exposed to the dynamics of climate change, such as drought and desertification processes, which contribute to escalating the vulnerability of rural livelihoods. Food losses and waste (FL&W) in the NENA region are high and contribute to reduced food availability, aggravate water scarcity, adverse environmental impacts and increased food imports in an already highly import-dependent region. Qualitative losses in the region are very high and exacerbated by deficient market infrastructure, especially for food destined for domestic markets. This includes a lack of cold chain infrastructure, poor transportation such as in non-refrigerated vehicles, and open air markets where food is exposed to heat and sunlight. These factors speed up food degradation and create health hazards. Measures to reduce quantitative losses will also reduce qualitative losses. The causes and origins of FL&W are attributed to poor farming systems and deficient infrastructure and practices at all post-harvest stages of the supply chain. In the last two decades, the population has doubled due to high birth rates, with this demographic change taking place rapidly on a rich but fragile resource base, with acknowledged limitations in terms of land, water and food production, especially characterized by rain-dependent production and traditional agro-silvo-pastoral systems and artisanal fisheries. Insecurity is aggravated by high unemployment rates in the general population, especially among youth. The impacts of poverty and unemployment have contributed to social marginalization, which is further compounded by income disparities, and gives rise to social and political instability. Mounting economic, social, and environmental strains and their resultant implications on livelihood security make the situation unsustainable in NENA countries.

All Mediterranean countries are passing through a “nutrition transition” in which under-nutrition problems (wasting, stunting, underweight) and micronutrient deficiencies coexist with over-nutrition problems (overweight, obesity) and diet-related chronic non-communicable diseases. This nutrition transition is alarming as it affects negatively the livelihood of all people in the region. In many Mediterranean countries, eating habits are changing towards “Westernized” style dietary patterns. The urbanization of society, the integration of women into the labor market, long working hours and retail development are modifying considerably dietary behaviors. Therefore, this growing nutrition transition also has a direct effect on the erosion of the Mediterranean Diet, as noted by several surveys that is increasingly less followed by the populations of the Mediterranean countries, with undesirable impacts not only on health and nutrition but also on cultural, social, economic, environment sustainability in these territories. Data show that the Mediterranean diet is becoming less the diet of choice in most Mediterranean countries, despite the fact that its health and nutrition benefits have been supported by scientific evidences since the early epidemiologic and cohort studies conducted more than 50 years ago. The Mediterranean diet is associated with its characteristic food products, inextricably linked to the Mediterranean agrarian and sea landscapes, with their diversified ecological, cultural, social and economic dimensions. The symbolic value of food and its identification and differentiation has led to the creation of strong links between local food and local heritage and identity -- the construction of cuisines de terroir(s), and local-food production knowledge and skills -- through the establishment of systems modeled on the geographical indication of provenance. These products of origin-linked quality are strongly connected to the sustainability of the Mediterranean diet and the preservation of biodiversity. Exacerbation of gene pool depletion due to erosion of agro-biodiversity as a result of globalization trends and climate change is reducing the sustainability of local production systems, along with the ability to safeguard the Mediterranean Diet heritage based on indigenous food species and varieties.

The Mediterranean is among the richest regions in biodiversity in the world, home to a multiplicity of ecosystems and species. It has in fact been identified as a `hotspot’ of biodiversity, an area featuring exceptional concentrations of endemic and historically imported species, but which are sadly experiencing unprecedented loss of habitat. This loss of agricultural diversity occurring around the region has negative repercussions on the food and nutritional security and livelihood of the local populations. The loss of indigenous knowledge on the use of local crops in favor of a small number of recently imported non-native species and varieties has affected traditional food production systems and biodiversity across the Mediterranean area.

HISTORICAL CONTEXTUALIZATION OF THE SECOND WORLD CONFERENCE IN PALERMO

Since 2002, the Forum on Mediterranean Food Cultures, CIHEAM-Bari, Las Palmas University of Gran Canarias, La Sapienza University of Rome, and ICAF (International Commission of the Anthropology of Food and Nutrition), have developed a continuous collaboration on the Mediterranean diet as a resource of sustainable development for Mediterranean countries.

In 2005, in Rome, “The Call of Rome for a Common Action on Food in the Mediterranean” was issued on the occasion of the third Euro-Med Forum "Dialogues between Cultures and Civilizations of the Mediterranean on Food Security", jointly organized by the Forum on Mediterranean Food Cultures and the Sapienza University of Rome, in collaboration with CIHEAM-Bari, ICAF, and the support of the County of Sicily.

As follow up, in 2010, at FAO in Rome, the Scientific Symposium "Biodiversity and Sustainable diets: United Against Hunger" was organized by FAO and Biodiversity International, with the collaboration of INRAN, CIHEAM-Bari, FENS, IUNS, in which a common position was reached on the following definition, internationally acknowledged, of “sustainable diets”: Sustainable Diets are those diets with low environmental impacts which contribute to food and nutrition security and to healthy life for present and future generations. Sustainable diets are protective and respectful of biodiversity and ecosystems, culturally acceptable, accessible, economically fair and affordable; nutritionally adequate, safe and healthy; while optimizing natural and human resources”.

In 2012, in Malta, on the ninth meeting of Agriculture Ministers of the CIHEAM member countries, the Ministerial Declaration highlighted the role of the Mediterranean diet as a "driver" for sustainable food systems within the Regional development strategies.

In 2015, at the EXPO of Milan, “the Med Diet EXPO Milan 2015 Call: Time to Act " was issued by CIHEAM on the occasion of the International Conference “Does the Mediterranean Diet Still Exist? Nutrition-Health-Quality-Sustainability-Innovation-Evolution", jointly organized by CIHEAM-Bari, CNR, CREA, ENEA and Forum on Mediterranean Food Cultures and endorsed by 81 institutions.

Always, in 2015, at the EXPO of Milan, the Sustainable Food Systems Programme (SFSP) of the United Nations 10 Year Framework of Programmes on Sustainable Consumption and Production Patterns (10YFP), now called “One Planet” was established, with FAO and CIHEAM part of its Multistakeholder Advisory Committee (MAC). .

In 2017, in Bari, the FAO/CIHEAM International Workshop "Development of Voluntary Guidelines for the Sustainability of the Mediterranean Diet in the Mediterranean Region" was organized at CIHEAM-Bari in the context of the One Planet Sustainable Food Programme Systems of the United Nations (SFSP), with the participation of several Mediterranean members of the SFSP: Hebrew University, Al Quds University, ENEA, UNESCO Chair Universidad Oberta de Catalunya, IFMeD, CIISCAM, HHF, CREA (formerly CRA-NUT), University of AIX-Marseille/Inserm/INRA, FQH, American University of Beirut, Chouaib Doukkali University, CNR. One objective of this workshop was to finalize a proposal for the development of a One Planet SFSP Mediterranean Multistakeholder Platform on Sustainable Food Systems. The implementation of the 10YFP is inscribed as target 12.1 into the SDG 12 on Sustainable Production and Consumption.

The Second World Conference has the aim to better identify strategies, programs and actions, able to provide solutions for coping with current critical challenges in the region through more sustainable Mediterranean food systems, by bridging sustainable food consumption and production through the Mediterranean diet as a lever.

The Conference has the scope, with a science-based approach, to continue strengthening the dialogue, between North and South Mediterranean countries, by linking food security and nutrition to sustainability, towards a shift towards more sustainable food systems in the region, for ensuring sustainable development, security, stability and l well-being for present and future generations.

The underpinning rationale of the Second World Conference is that a better understanding of the multidimensionality of the sustainability of food systems will strengthen the dialogue between North and South countries to address growing challenges for food security, nutrition and sustainability, in the Mediterranean region